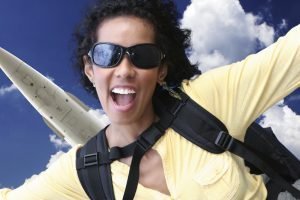 My sister was running a hang gliding business and said people asked her how to prepare and she laughed and said, “just take your earrings off and jump” and I instantly thought of how “this advice” could help me in my career and life. I started sharing the concept with my clients who were stuck and they would say, I need to let go of me fears, and just jump!

And even if your “jump” is just a mental shift, have fun with the metaphor and use it to propel the baby steps you need to take towards success.

I refer to this “jump” from where you are now to where you ideally want to be in life as the knowing/doing gap. You want a better relationship, increased health, and a new job but don’t know where to start and are often afraid to take the leap. I have also heard this called the “knowing/doing gap,” a term coined by Stanford Business professors Jeffrey Pfeffer and Robert Sutton in reference to businesses. But I find that it’s not just companies that struggle with implementing their plans, but rather many individuals. We know what we want to do and sometimes we even know how to do it, but we can’t quite put that knowledge into action.

I came up with  5 Things That Will Help You Get From Where You Are to Where You Want to Be and hopefully inspire you to “just jump” into success.

Often when you’re stuck it’s because you aren’t excited enough about your dream destination. Why do you want to be thinner, richer, and happier in your marriage? What makes you excited about these changes? How will becoming this new person make you more fulfilled and successful?

Baby steps can seem boring until you start thinking about why the destination they lead to really matters. I noticed the effects of this new mindset when my client heard about a job that truly inspired her; she quickly edited her resume, had a professional photo taken, posted an amazing LinkedIn profile, attended a local networking event connected to the new job, and became unstoppable in a matter of days after being stuck for months. She had found her “why” to propel her forward.

So if you’re feeling stuck on the “how,” try refocusing to think about the “why” instead.

2. Accept Detours on Your Road to Success

On our roads to success, we’re often tempted to follow other people’s maps. However, most successful people tell me that, while they planned “straight line” routes, they ended up taking winding paths. But guess what? These scenic routes still got them to their destination!

Having a rough map is a great thing, but trust yourself to know when to get out the eraser and re-route. We’re often scared to start driving when we don’t know our paths, so we justify inaction by telling ourselves that sitting still is better than taking a step in the wrong direction.

To avoid becoming dormant, write up a temporary map and accept that there will be some detours along the way to your destination. Don’t worry about passing sites taken from someone else’s map—if a stop on the journey doesn’t inspire you, then it may actually be leading you to a dead end.

Decide on a new route or strategy that supports your broader plan while ensuring that you know why you’re making each movement. By creating a fun plan that touches on various areas of your life in a way that makes sense to you, you’ll find that it’s much easier to move ahead. You’ll be more excited about the direction you’re headed in when you really know how each step plays a part in your life’s overall journey.

3. Take Your Earrings Off and Jump

We often think that we need road maps with step-by-step directions toward success when usually we just need to jump. Even if you aren’t finished with your vision board, your goals still need modifying, your morning routine isn’t consistent, or your game plan feels more like a rough draft, just get moving!

Think about the woman jogging down the street and making the decision whether to turn left or right at the light—she often jogs in place so that she doesn’t lose momentum. Forget about being perfect—just start doing something connected to who you want to become in order to get the momentum going. If you’re working on being more assertive, stop and introduce yourself to three new people. If you’re dreaming of being a more generous mom, start by reading one extra story at bedtime.

Actions don’t have to be accomplished in huge leaps; change can occur through small, incremental steps. Just trust your life vision and allow your intuition to guide you as you take baby steps toward a better version of yourself. Before you know it, you may even find yourself leaping forward on your path to success.

4. Act as if it Were Impossible to Fail

A military spouse once said to me, “Krista, I don’t think you get it, there are no jobs here! There are hundreds of applications just to work at the gas station on base! There’s no job for me here!” I responded by pulling her back from her visions of failure with the question, “What is your dream job?”

While the idea of a dream job initially seemed foreign to this spouse, she eventually shared that she had once had a fun and fulfilling job at a department store cosmetics counter. At this point in her story, however, she returned to negative thoughts, talking about her horrible boss. I reminded her of the positive aspects of that position, asking her whether or not she would enjoy another job in cosmetics. When she began to speak about the lack of opportunities, I interrupted her, asking, “What would it look like if it were impossible to fail? What if you knew that you would be successful?”

She was stumped at first, but then the ideas began to flow. She actually got excited brainstorming, thinking about what “not failing” would look like.

We often make lists of tasks to accomplish when we’re feeling jazzed and energized, but when it comes to putting these plans into action, we second guess ourselves, doubt our abilities, and, in short, give into our fears. What we need in order to continue on our paths to success is the opposite of fear—faith.

Believe in yourself. Have faith. The work process you implemented in order to fulfill your dream will lead you to success. As you work hard on developing new skills, adopt positive habits, and make new lifestyle commitments, you take steps toward your goals.

Don’t become stuck in the divide between knowing and doing. Follow these five steps and, before you know it, you’ll be well on your way toward success! 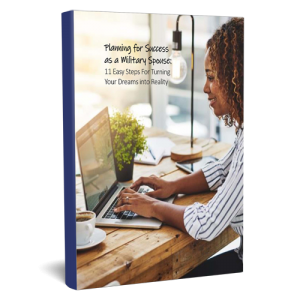